California is the largest producer of pistachios in the United States of America. The pistachio is a native tree to Afghanistan, Iran, and Turkey, and has been cultivated since about 7000 years B.C. The acreage of pistachios in CA continues to grow and as of 2014 there were about 225,000 bearing acres. The first commercial crop in CA was harvested in 1976. It takes about 6 years for a young tree to begin to bear fruit. There are both male and female trees which are needed for pollination. Pollination is wind born and does not require honeybees. The trees bear in alternate years with one year having a heavy crop and the next year a light crop. It takes about 15 growing years for a crop to be profitable, however trees can profitably bear for more than 50 years. 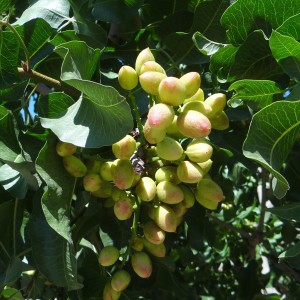 Botanically the pistachio is classified as a drupe. The edible part is the seed. Pistachios bloom in March in CA. The shell expansion occurs after pollination and begins to harden in June. The nut develops in July. By late July and early August the hull or husk splits, but the nut remains intact. The nuts ripen in at the end of August and into September and at that time the husk or hull becomes loose. Shell splitting begins about this same time. Harvest usually starts in early September and lasts from four to six weeks. The nuts are harvested with a mechanical shaker. The nuts are immediately processed to preserve the highest quality. Historically more than half the crop is exported to China, Europe and Canada. 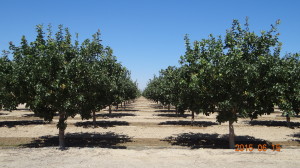