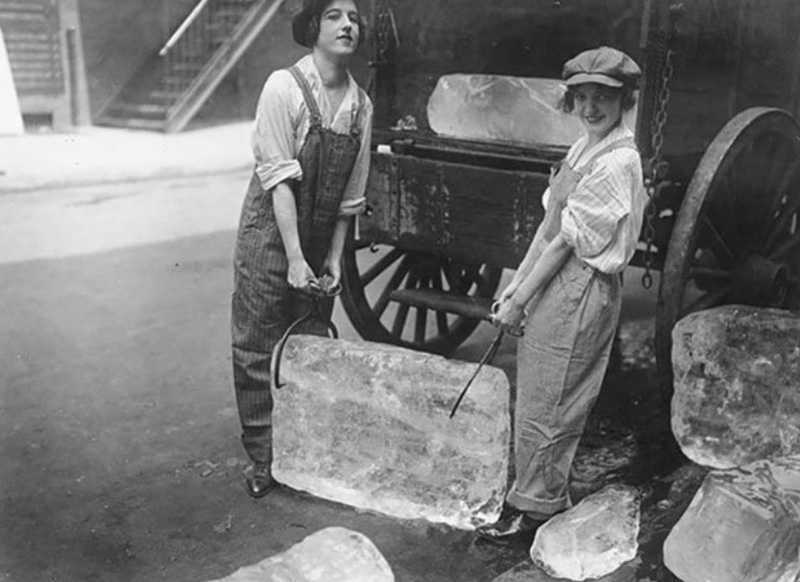 We wanted to relate a few stories about block ice, which is now pretty much a forgotten subject. Growing up in the 1950s and 1960s, even then block ice was fading in it’s importance. We believe you can still buy it, maybe still in ice vending machines, in some places in the United States and probably around the world.

Centuries ago ice was kept year around as a method of food preservation and to keep drinks cool. We’re sure there was a variety of other uses for the preserved ice. We have three examples of ice storage to relate.

Of historical significance is the ice house at Monticello, the home of Thomas Jefferson. I saw this as a young man. My memory is that it was a deep circular stone lined cellar, that was filled in winter with river ice cut into blocks. When filled, it was most likely covered with sawdust which was an efficient, available insulator at that time. The ice would be used during the year and refilled in winter.

I grew up in a victorian neighborhood in a small town in western NY state. The houses were built about 1900. The neighbor’s garage/barn was an old ice house. You could tell because the walls were very thick and made to insulate the ice.

The last and only functioning ice house I ever saw was on a fishing trip in Ontario, Canada about 1963. It was on an island in early spring, probably in late April or Early May. If you have ever been to that part of Canada, an island is little more that bare rock sticking up out of a lake with just enough soil on top to sustain the life of conifer trees, wild blueberry bushes, and moss. The ice house was a low building, built like a log cabin, over a depression in the rock. There were layers of ice, with layers of sawdust in between the layers of ice blocks, so that the sawdust filtered down in all the cracks in between the individual blocks for insulation. The ice house was full; the ice being cut just a month or two before from the lake. The ice is cut from the frozen lake when the ice gets at least a foot deep and can be walked on relatively safely. The ice is cut with a special saw. The blocks are then transferred to the ice house. Keep in mind that other times when we were up in that part of Canada in the summer time, we drank the water directly out of the lake. It was clean enough to do that, with very little risk. It may still be?

We stayed in little cabins on the lake and fished during the day. There was a camp kitchen where our meals were cooked. I don’t think there was any electricity on the small island, hence the need for the ice house. When we caught fish. The fished were cleaned, packaged and stored in the ice house. We had a great time!

As gifts form my parents, we have two sets of ice tongs. Ice tongs are something that would be unfamiliar to most people today. In the attached photo you can see the two women handling a big block of ice with the ice tongs. We have an old pair and a “newer” pair. The newer pair is made out of cast iron and was mass produced probably in the early 20th century. The old pair were hand forged out of steel and every curve of the handles and the points of the tines were hand hammered out of hot steel. The hand forged pair are mounted and have been used as a decorative paper towel dispenser for many years. These tongs were most likely made sometime in the 1800s.

Before electricity was installed in everybody’s house, and before refrigerators were invented, people had an “Ice box” in there kitchen. Some people still call a refrigerator an “icebox”. An ice box was basically a wooden cabinet with insulated walls and at least two compartments that were separated by sheet metal. One compartment for the ice and another for the food. Since the ice melted after a day or two, the ice needed to be replaced regularly. The ice was delivered by a truck and a delivery person or persons. Everybody had an ice pick so you could break off a piece of ice from the ice block, to put it in your drink, or make ice cream (but that is another story).

Over time came electricity, refrigerators, ice dispensers, etc. and the demand for block ice diminished. For the most part, only bagged and cubed ice is available now. 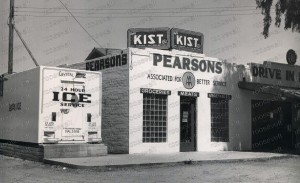 My family were big campers back in the 1960s. We would take three week vacations camping in a somewhat primitive tent trailer by today’s standards. One time we took a trip from Buffalo, NY to Glacier National Park in Montana. We drove through all the Canadian provinces to get there and drove back through the northern United States. This was before interstates and air conditioning, not to mention cell phones. Our only way to keep our food cool was in an ice chest which we filled it with a block of ice at an ice vending machine. Most small towns had an ice vending machine that dispensed block ice and cubed ice. Block ice melts more slowly than cubed or crushed ice. At that time you could buy a 25 lb. block of ice for between 15 to 25 cents.