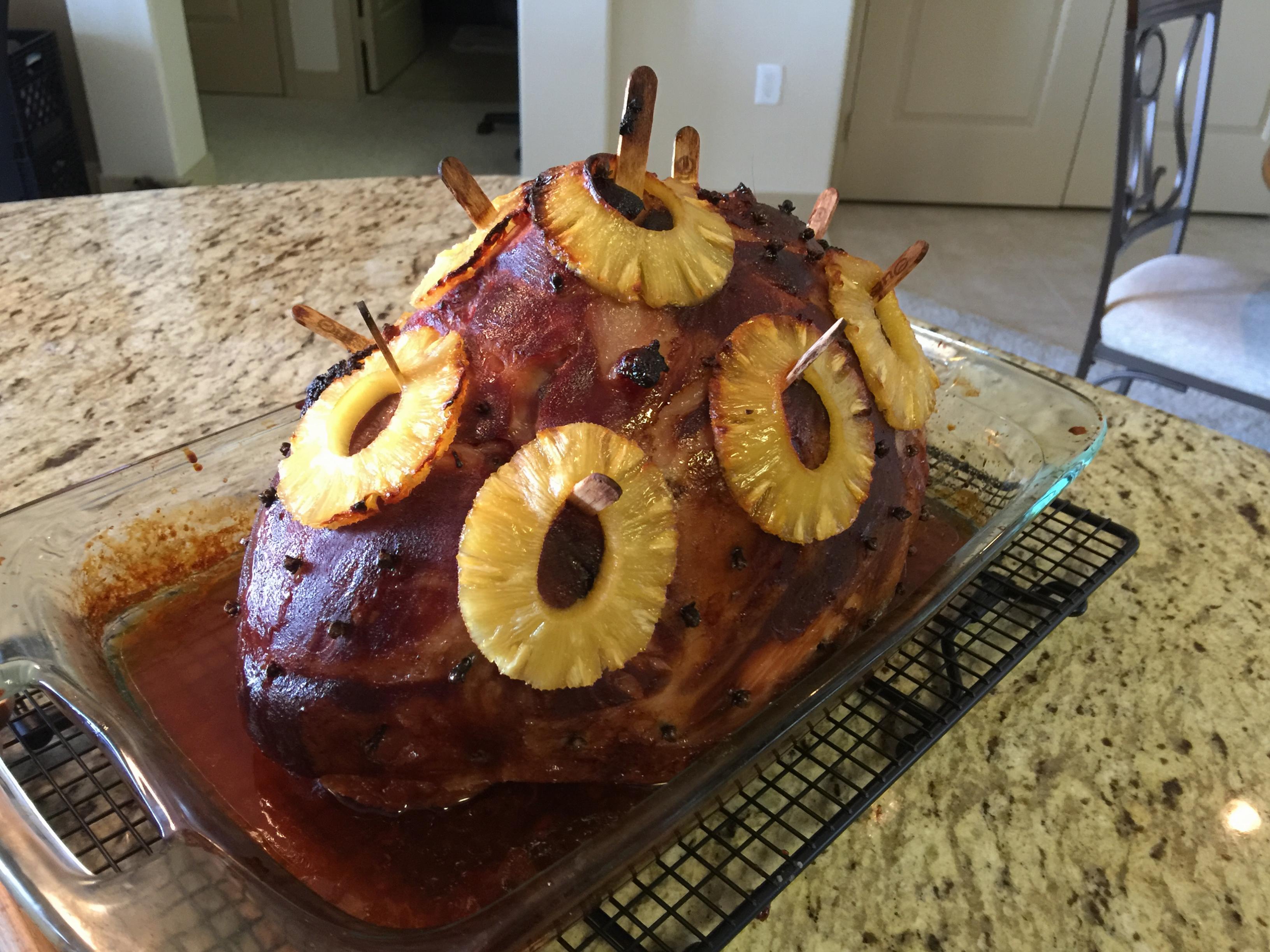 One of our favorite ways to eat ham is a home cooked, baked ham with cloves and pineapple. Several times a year, half and whole hams are placed on sale with a significant price discount. Easter is a common time for ham to go on sale. These hams can be cooked when purchased or frozen for use months later. The meat of a baked ham has a flavor similar to deli ham which is very expensive. However you can bake a ham yourself for about 75% less per pound. Baking and preserving a large ham is relatively simple and easy to do. These hams are already fully cooked, but are normally cooked a little more to add flavor. 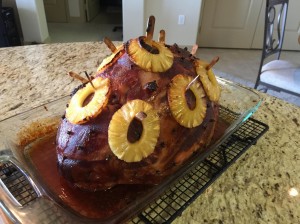 When selecting a half ham you may notice two different types of ham shapes in the packaging. A whole ham is originally cut from the pig with the portion connected to he hip on one end (butt end) and the part connecting to the knee on the other end (shank end). When they cut a whole ham in half to be packaged, the shape of the half ham will look a little different depending on which half of the ham you are looking at. The bone inside the ham will look different. The ham cooks and tastes the same, however if you cook a lot of hams, you may develop a preference.

The simplest way to prepare a baked ham is to follow the simple directions on the package, by taking off the packaging, placing it in a baking pan, and putting it in the oven for the specified amount of time, at the specified temperature. Usually baking at 325 degrees for 15-20 minutes per pound. A fresh ham would need to be completely cooked for a much longer period of time. 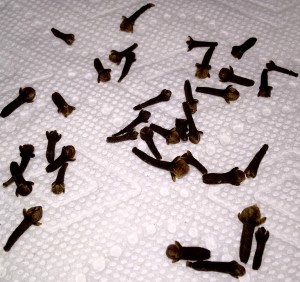 Our recipe is for a ham baked with cloves and pineapple, which adds a clove spice flavor and a sweet pineapple juice flavor enhanced with honey. A clove is the dried flower bud of a tropical tree, grown in the Maluku Islands, India and Pakistan, with the botanical name Syzygium aromatic. We purchased Kroger® brand cloves which were of very high quality. These cloves were half the price of the branded clove products for the same or better quality. 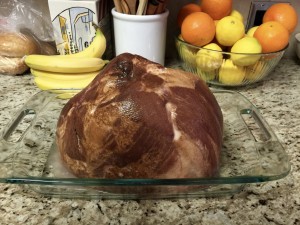 Ingredients
1) One half or whole ham with package and plastic “bone” guard removed
2) Whole cloves
3) One can of pineapple slices, juice set aside (although you could also use pineapple chunks)
4) Honey
5) Toothpicks (we were out of toothpicks and substituted popsicle sticks broken in half and carved to a point) 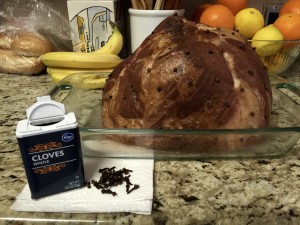 Inserting whole cloves into the ham

Putting it all together
1) Pre-heat oven to 325 degrees
2) Place the ham in a baking pan flat side down
3) Insert the cloves an inch or two apart evenly spaced all over the surface of the ham
4) Attach the rings of pineapple with a toothpick evenly spaced over the ham
5) Combine pineapple juice with some honey as a glaze to baste on the ham as it cooks (optional)
6) Place the ham in the oven and bake per directions, 15-20 minutes per pound at 325 degrees
7) Baste 3-4 times with the pineapple/honey juice as the ham cooks
8) When done, remove the ham from the oven, take off the pineapple slices and remove the cloves
9) Wait about 10 minutes before slicing, (however it will be almost irresistible not to sample small bits of ham and pineapple) 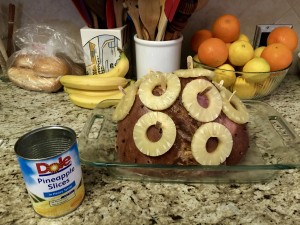 Adding pineapple rings to the ham

We liked adding the pineapple/honey juice basting liquid. You could also do it with just the pineapple juice alone. It does create a sweet tasting accumulation of meat juices in the bottom of the baking pan. We used these meat juices to make a nice ham gravy to be served over mashed potatoes.

When the ham is out of the oven, let it cool down for about 10 minutes. While you are waiting you can remove the pineapple and cloves. If you are going to make gravy from the meat juices, now is the time to transfer the ham to a serving platter. Next drain the meat juices into a sauce pan for making the gravy. We served our dinner with ham, pineapple slices, mashed potatoes and ham gravy, with asparagus. It was delicious!! 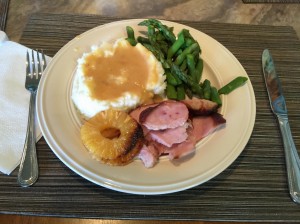 We always have leftover ham and enjoy eating it in a variety of dishes, from simple sandwiches to omelets, scalloped and au gratin potatoes, pizza, split pea soup, etc. We prepare “chunk” ham, sliced ham and diced ham. The first step is to go through each piece separating the chunks along natural separation points. Next we trim away the fat and any other undesireable pieces. We save the bone for making split pea soup. You could also add the bone to mustard, turnip or collard green preparation. 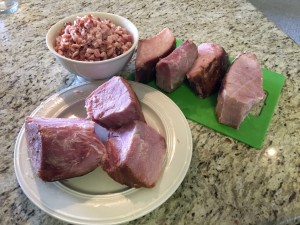 Depending on how much ham is left and what cuts are available, we prepare the ham accordingly. When in doubt, we freeze the ham as a chunk, which can be thawed later. Using this method, we have a lot of options for using the ham in the future. 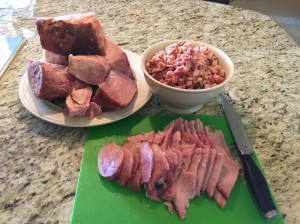 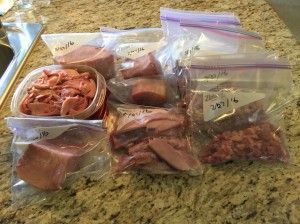 Freeze the ham in labeled packages, in amounts you can easily use