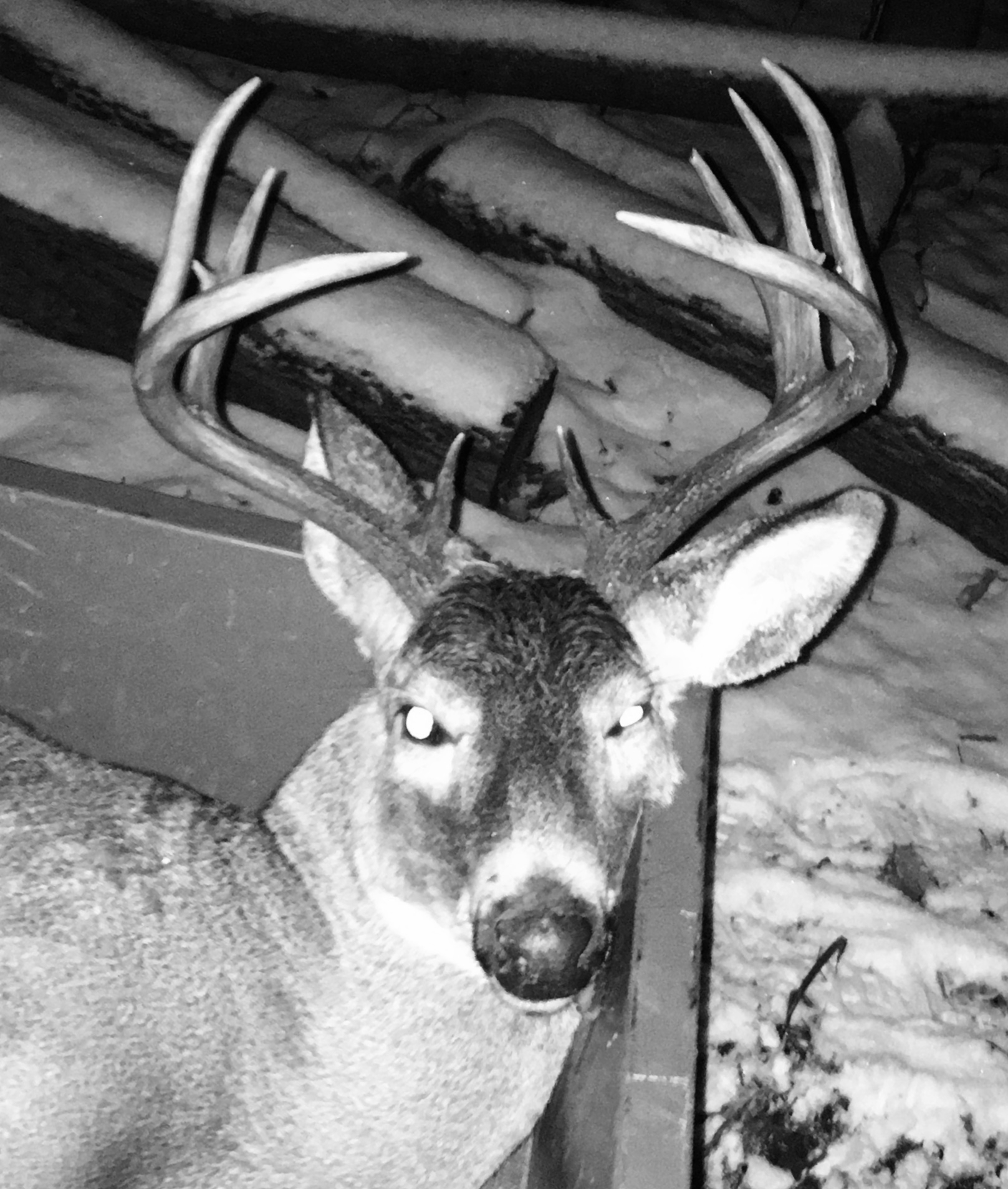 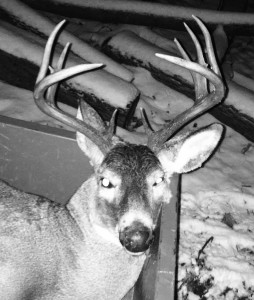 This hunting season I shot my first whitetail deer with antlers and it turned out to be a nice 10 point buck. I have been deer hunting on and off since I was 16 with probably about 17 years of actual deer hunting. I am 62.

We have about a five acre field up behind our barn that is mostly surrounded by a deciduous forest, except for an area of over grown balsam fir Christmas trees. There is a small spring fed pond less than one eighth acre located on the edge of the forest. Deer and other wildlife use this as a source of water to drink. In this field we have planted food plots, mainly Whitetail Institute Whitetail Clover. The deer feed on this daily from early May through late December. We also have our honey bee hives located on the edge of this field (honey bees need a source of water). In many ways it is an ideal spot for deer to live. It is in this field that our story takes place.

I have hunted here before and seen many deer including one other very large buck. Another very large buck was shot by my neighbor’s wife, and probably a lot more came and went through the years without being noticed. They are attracted to this location additionally because does with fawns annually raise their young here. It is a good place for bucks and does to “hook up” during breeding season, which is also hunting season.

I hunted this spot on the Saturday evening of the opening day of “Regular” or “Gun” season starting about 3:30 PM. You can hunt till about 4:45 this year which corresponds with sunset.
My view looked out over several food plots of different ages. Looking to the west was the setting sun with the silhouettes of trees in the background. It was looking west that I started to see some movement. First came a healthy fawn into the field edge. Almost immediately a red fox approached from the opposite direction cruising the field looking for a mouse for dinner. They approached about thirty feet away from each other, had a momentary stare down and then went their separate ways in the opposite direction.

Next out of the woods came a limping fawn. Something had happened to it’s front leg which made it limp. After about ten more minutes a spike buck appeared. The spike buck and the limping fawn seemed to relax, put their heads down and stared to graze on the clover. The healthy fawn kept putting it’s nose in the air sniffing for the scent of danger.

The quiet was interrupted by the honking of geese flying overhead. They seemed to be circling looking for the next place to land. Twice, the flock of maybe a hundred geese rose up in the air so the setting sunlight shined through their wing feathers making them look like specks of gold glittering against the blue sky. A few minutes later a flock of ducks flew overhead much lower and I could hear the flutter of their wings against the air.

I watched these three deer for about twenty minutes, sitting on five gallon bucket, when I decided to practice getting my rifle in position like I was getting ready to shoot the spike buck. I was in an awkward position to grab my gun which was leaning on a tree and then maneuver quietly to get in position to place the deer in my sites. I was about halfway through this process when my jacket caught a twig, which snapped, and sent all three deer, tails in the air, leaping back into the safety of the forest.

It reminded me of what I already knew. Don’t sit!! Stand and wait, ready to shoot, with gun in hand!!

Sunday morning I took a long walk on the property across the road. The woods were very quiet, with only an occasional shot being fired in the distance. The caw of a crow or the chirp of a bird broke the silence occasionally. There were occasional heavy snow squalls through the morning. I found shelter behind a tree to keep from being covered with snow during the squalls. When you walk though the forest this time of year, it is a good time to put your “Forester” hat on and check the trees for those that should be harvested, those that need to be thinned and those that just need to grow. I didn’t see a deer all morning!

At 3:00 I headed out back to my bucket, but did not sit on it! I hid behind a triple trunk cherry tree and waited patiently with gun in hand, standing! I watched the field through the gaps in the tree trunks. After about fifteen minutes a fawn came out of the forest and started to graze in the same spot as last night. It is always good to see some activity, so I just sat and watched the fawn graze, while scanning the rest of the field every few minutes.

Then I noticed some movement about 150 feet further down along the same forest edge about 4:20 with the sun almost set. First a doe, then a fawn, then another fawn, then another doe and then the same spike buck as the evening before. Some of them stared to graze. The glint of the setting sun on yellow antler drew my eyes inside the forest edge. There behind this little herd of deer emerged the large ten point buck that we had been seeing on our camera. It was beautiful! It slowly moved along the field edge gradually getting closer to me and walking broadside. This would be a perfect shot, if I could get into position and make the shot. I was shooting the old fashioned way with open sites, no scope.

I lifted the rifle in between the tree trunks, cocked the hammer and released the safety. I was I little more excited than I anticipated and took a moment to calm down. Then I lined up the rear “V” site with the front “I” site and the chest of the buck. I pulled the trigger. Up and off he ran bursting back towards the woods, but I thought I detected a slight “stagger” as he took off.

I walked over to where I shot him, but there was nothing, no blood, no hair, no nothing. Maybe I missed him completely? It wouldn’t be the first one I missed! I started following the tracks and noticed a few specks of blood, so I did hit him! I followed the tracks and minor specks of blood and found him expired in the woods about 200 feet from where he was shot.

There was a quick walkie-talkie call to my son for help as the sun had set and it was getting dark and colder. We decided that I would start field dressing the deer while he walked up to help. Once we finished that, we dragged him a short way to one of our hiking/logging trails.

Down to the barn we hiked to get our tractor started, which sometimes doesn’t like to start on cold days. It had been about 30 degrees all day. It started with a little extra cranking. We hitched up a small wagon and drove it up to pick up the deer.

To clean it up, we drove it down to the house and washed it with a garden hose, so that it would be ready to be butchered. We agreed to give the deer to our neighbor the following day, so we took it to the barn to hang. Our neighbors will butcher the deer and use the meat during the upcoming year. Hanging the deer for our purposes allowed the body to cool down uniformly and helped to keep it clean and preserve the meat. We used a gambrel to this. The next day we were able to lower the deer into our wagon for delivery.

The antlers on this deer, although not in record territory, will make a nice mount. We will be making a skull mount on our own. We had a conversation with another neighbor about how to do this, which appears be possible by an amateur, with a little planning and a little work.

This was the first antlered deer I have ever shot. Although a minor milestone, it does feel like something has been accomplished. Hopefully, the tradition of going deer hunting with my son on opening day will continue into our tenth year. We have a great time each year regardless of whether we are successful hunters.