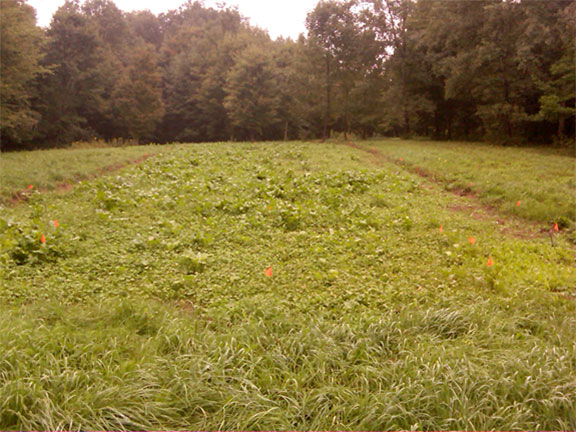 Importance: Percent protein seems to be the primary method to measure quality in clover used for wildlife food plots. Protein increases the ability of deer to grow, remain healthy and develop antlers.

Conclusions: The products that are designed to influence soil microbial activity or provide microbial inoculation, resulting in nutrient release and availability, appear to have increased percent protein in clover. These products are Agriculture Formula from Bio-S.I. and Soil Solution from DeltAg. An increase of percent protein from 7% to 9% was observed. This increase may justify applications of these products in wildlife food plots, for deer, to increase animal health going into the rut and the following stress of winter weather.

The other products warrant further testing to determine their value during other portions of the growing season such as spring re-growth, re-growth following summer mowing, dry conditions, and disease favoring conditions,

Bio-S.I.™ Technology, LLC., Agriculture Formula – is a soil inoculant with a broad and diverse spectrum of naturally occurring beneficial microbes and enzymes for rebuilding the soil resulting in increases nutrient availability. 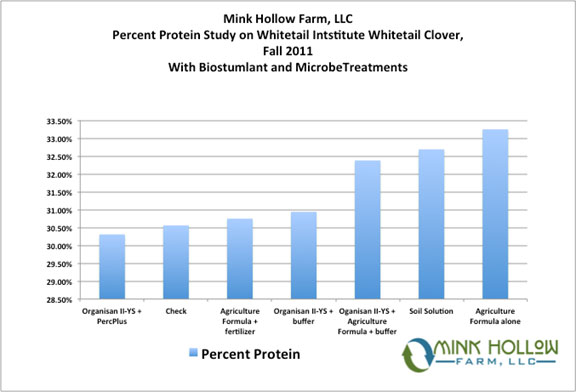 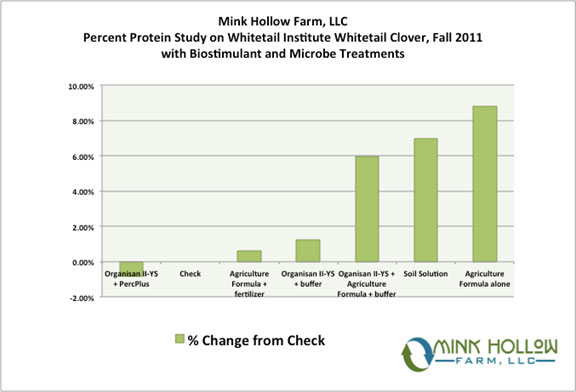 The Soil: The target pH for clover is 6.5. Our plot, previously on non-cultivated farmland, has a pH of 5.5, which is low. Lime was applied in 2011 but future annual applications will be necessary to increase the pH. This plot tested high for potassium (K), Magnesium (Mg), Calcium (Ca), and Manganese (Mn), but low-medium for Phosphorous (P) and Boron (B). Sulfur, Zinc, Iron, and Copper, and organic matter were not tested. It is evident that there is an adequate amount of organic matter, probably greater than 2%. The soil is a heavy clay loam with excellent surface drainage.

Planting:
The food plot was planted in mid July 2011. This is the recommended time to plant clover for food plots in western NY State. The plot is approximately 6000 sq. ft. (.14 acre).

The plot was planted with Whitetail Institute “Whitetail Clover” and “Double-Cross” Whitetail Clover / Brassica mix. I mixed the two seed mixes together because I did not want to be overcrowded with brassicas. More seed than recommended was applied to make sure a good stand was established. The seedbed was less than ideal with a some excessive plant trash material in places. Generally conditions were dry during germination. 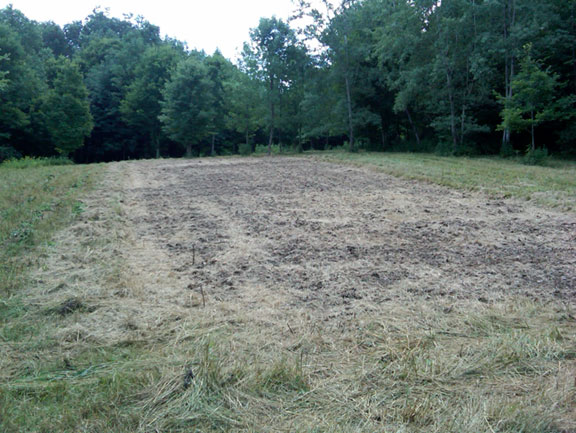 Planting Progression: (site was weedy and non-cultivated for at least 15 years; acid clay loam soil with some nice surface topsoil)

Day 1 – Spay glyphosate, PercPlus (biostimulant), Soil Solution (biostimulant), Heat (adjuvant), and Blue Dye. Wait for plant yellowing.
Day 3 – Obvious yellowing – bush-hogged as low as possible, raked, disked.
Day 4 – Spread lime and 10-10-10 fertilizer. Disked in the fertilizer and lime. For the last disking, the adjustable disc blades were oriented as straight as possible resulting in a more level seedbed. (this is an advantage of adjustable disk blades)
Day 5 – Spread seed without any further cultivation.

The plot was growing well but with a few low germination areas by the second week of August. The plants were less than 2 inches tall for the most part, with some noticeable grassy weeds in certain areas. The brassica percentage appeared sparse, but turned out to be perfect by November. The brassicas included rape, kale, and turnips. Overall there was good germination. There was a lot of clover, some brassicas, and some broadleaf and grassy weeds, but the clover became dominant. There are four test plots with other Whitetail institute seed mixes, “Chick magnet”, “Alfa-Rack Plus”, “Chicory Plus”, and “Imperial Whitetail Extreme” (within this plot). These plots are approximately 4 ft. by 5 ft. (20 sq. ft.). Three out of four of these mini plots were growing well. The plots were helped by timely rains during predominantly dry conditions.

The plot was sprayed with sprayed with sethoxydim (Poast Plus) for grass control immediately prior to the trial applications on Sept. 3, 2011. The clover and grass was 5 to 8 inches tall with brassicas 8 to 12 inches tall. The purple top turnips had bulbs forming about 1½ inches in diameter. 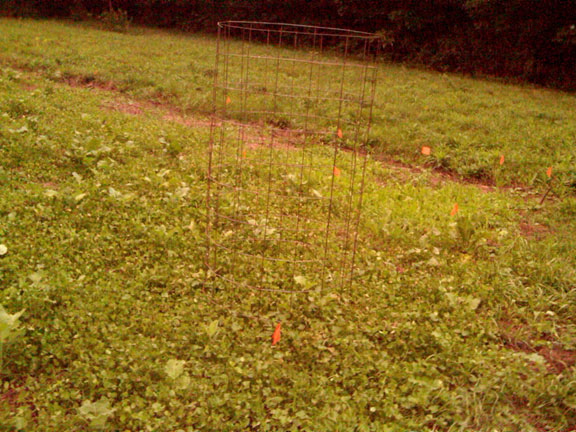 Stand Longevity: Another interest is stand longevity, which will encourage a long term study on the same plots over a series of years. The length of time to replanting would be a savings of time and money to a food plot manager. The materials used in this trial have the potential to:

These attributes would have a tendency to lengthen the number of years to replanting. Weed management would also be key to stand longevity. Some of these products when applied with herbicides may not only increase the effectiveness of the herbicide, but also facilitate an application timing without making a special trip across the field.

Clover and Brassicas living insulated beneath the snow. 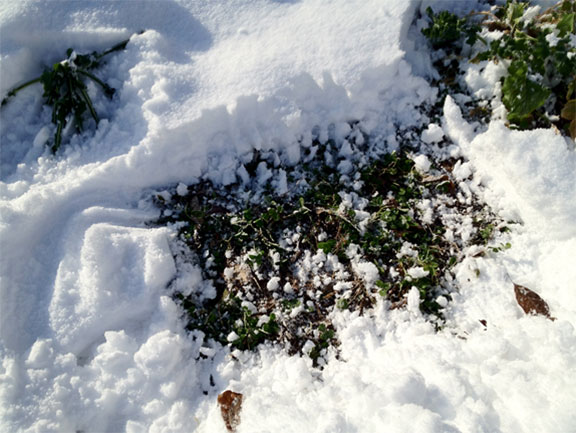 2010 Plots (non study related):
Wildlife food plots planted in 2010 did very well during 2011. Whitetail Clover and AntlerKing clover with Brassicas (3 plots) were planted. These plots were planted in mid July 2010. The deer kept the clover trimmed very close to the ground. The deer ate the heck out of the brassicas during the fall, after a good killing frost and into the winter, through heavy snow. I’m sure the brassicas helped my neighbor and his girlfriend to harvest two really nice bucks very close to the plots. The brassicas were eaten down to the nubs by spring.
The brassicas went to seed in July 2011 and re-seeded themselves in the established clover but these plants remained small and insignificant; probably from competition with the clover.

Maintenance:
Poast Plus was applied to these plots to control grassy weeds during the summer of 2011. These applications proved to be very effective and will extend the life of these plots.

These plots did well in 2011 but will need some broadleaf weed control in 2012. Assuming weed control can be achieved successfully, they will be available for further product test plots. Each plot is approximately 2000 sq. ft..

Clover planted on excavated farm road site:
Some remaining seed was also planted on an excavated area where I installed two drainage pipes on excavated, non-limed, non-fertilized, heavy clay subsoil. I planted that seed in mid August 2011. By Aug. 30th this seed was germinated and approximately 1” tall. This “plot” is at least 3000 sq. ft. It is actually planted on a farm road but will only be used occasionally. This planting will be watched for longevity and erosion control. I intend to make some lime applications to bring up the soil pH.

2011 Food Plots under snow during the November hunting season.