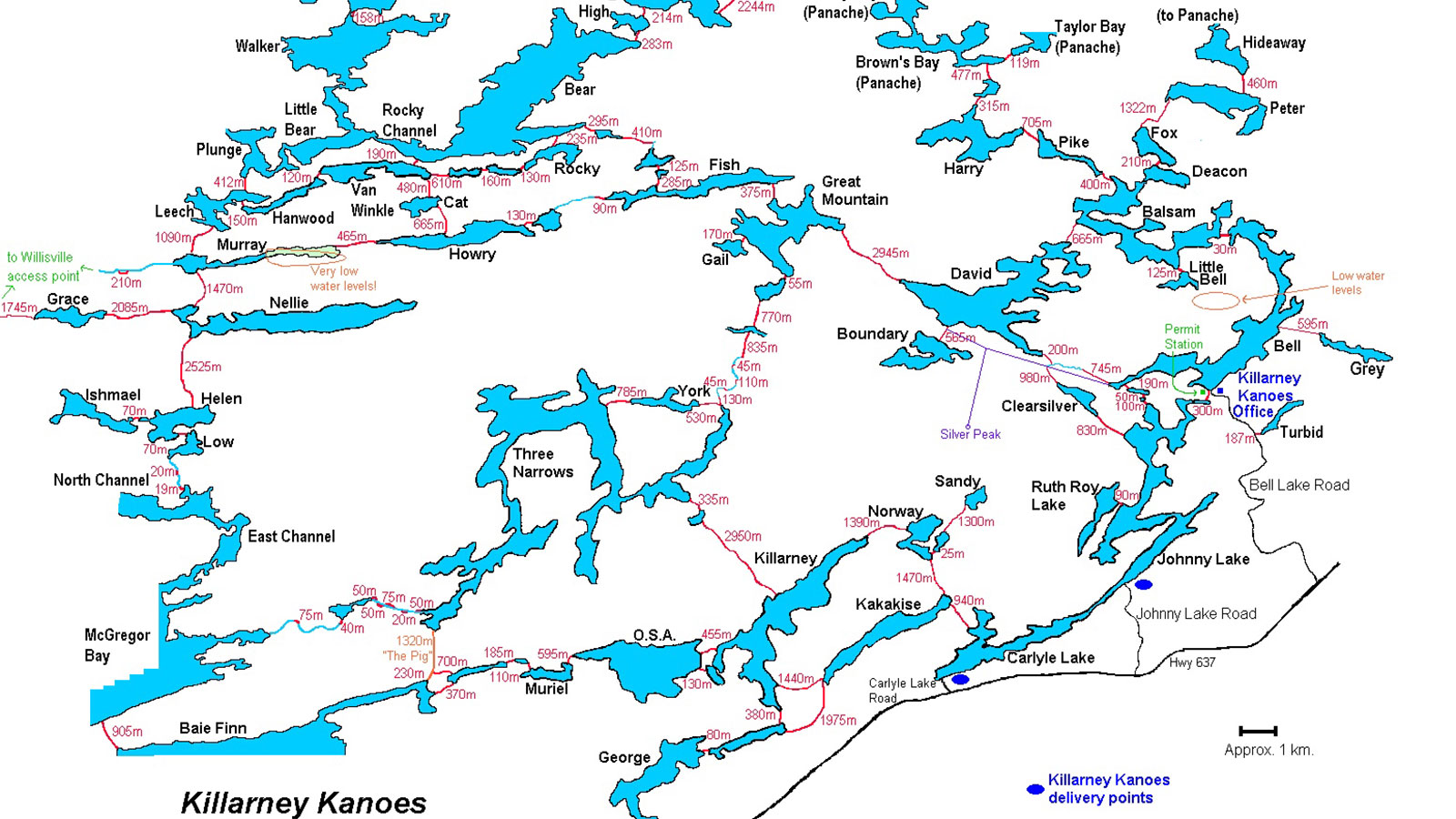 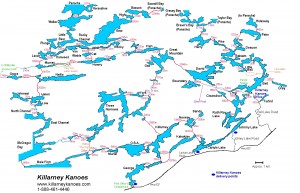 My father started going on week long canoe trips to Algonquin Provincial Park in Ontario, Canada with some friends from work. After a few years when my sister and I were old enough to go, he scheduled a trip with us. The year after, we scheduled another canoe trip in the lesser known Killarney Provincial Park. We were lucky that our father wanted to take us and he was probably lucky we wanted to go!! Dad had read about Killarney, but did not know anyone who had been there. I was about 16 and my sister about 12 years old. So off we went!

Camping in Algonquin and Killarney Provincial Parks are similar in that it is a combination of backpacking and portaging. You start your trip with backpacks containing everything (I mean everything!) you will need for the coming week and a canoe with paddles as your transportation on the water. When you need to portage from one lake, river or stream to the next lake, river or stream, you carry all your belonging from one place to the other. You can carry it all through at once or make a couple trips with lighter loads. We have taken portages from a few yards to 2 miles. Some routes are out and back and some are loops or combinations. (Don’t for get the toilet paper!)

We found there are two main types of portage campers. Ones that have a fast paced, defined route, which travel light, are up at daybreak, have a long route which is covered from dawn till dusk, usually eating easy to prepare meals or trail mixes along the way. The second group has a slower pace, a shorter route, which may stop at one place for a couple days, before moving on to the next, eating more eloborate meals, maybe fishing to add to the menu, maybe taking a nap or swim once in while; enjoying a campfire at night. We were classified in the second group!

In 1969 backpacking and canoeing was maybe what we would call an extreme sport today. My first backpack was a used pack my father brought back from his time in the army during World War II, just 24 years previous. There was no REI, Bass Pro, or Cabbalas, but there was LL Bean. Tents didn’t have screens or floors. A cook kit was a combination of old pots and pans and WWII vintage utensils. Paddles were solid wood, not laminate. Sleeping bags were army surplus and mats were unheard of. The Boy Scouts offered more modern equipment with aluminum frame backpacks, civilian versions of cook kits, silverware sets, and waterproof match containers. At some point I gave up my army surplus sleeping bag for a more modern version made out of synthetic fabric instead of cotton and wool; a rectangular bag instead of a “mummy” bag.

For food we repackaged macaroni and cheese, dehydrated scalloped or au gratin potatoes, dehydrated fruits, pancake mix, oatmeal, etc. and made our own “Gorp” (peanuts, raisins, and M&Ms). The first night we carried in fresh beef steak for our dinner. For preserved meat we brought Hickory Farms beef stick and double smoked bacon from a real butcher shop. Both these meats would keep for most of a week. We brought enough real eggs (about a dozen) for about the first 4 days of the trip or until they broke. For bread we brought a heavy seed rye bread. For cheese we brought a partial big block of Velveeta. For sweets we used small measured bottles of honey, real maple syrup, and a small amount of sugar. Knorr dehydrated soups or dehydrated bean soups made a nice addition. By today’s standards, bringing these types of food may seem like a lot of weight. For our type of relaxed camping, I am not sure we would change a lot, except for maybe some healthier substitutions and adding food packaging variations that were not available then. The goal was not to have any food left at the end of the trip!! So the packs got lighter every day!

Killarney Provincial park is about 30 miles off Rt 69 (Trans-Canada Highway). The small town of Killarney was about 5 miles farther. In the 35 miles between Rt. 69 and Killarney there were few buildings, and no stores or gas stations. There was a store, restaurant and gas station in Killarney. The park is 265 miles or about a 5 1/2 hour trip, with stops, from Toronto. At that time, a lot less visitors to Algonquin or Killarney made the trip up that far north. The roads would have been less improved and most likely two lane roads for much of the trip. When we reached the entrance to Killarney Provincial Park in 1969, the first thing we noticed was it appeared that no one had recently been there and this would have been in July or August. I don’t remember if there was an office or any staffing when we arrived at the park. I am thinking that there was not, due to the inactivity we observed. I remember starting off with the weeds being high and just a faint path for a trail and the trees being very tall. We almost looked at each other wondering if we were at the right place? I am certain my father had a map and knew we were in the right spot. After that, my memory has faded and I cannot sort out what I saw in Algonquin and what I saw in Killarney, but I do remember paddling next to some awesome cliffs, which we did not see in Algonquin. My sister reminded me that at one point we camped and paddled for two days without seeing another person. I am sure we saw some great sites and sunsets, had some wonderful camp food, had some good swims and jumped off some medium height cliffs into the clear water. It was a special trip because of the solitude! Now you can go online and view plenty of photos of the park interior by just typing “killarney provincial park photos”

At the end of the week, we decided to drive down to Killarney. I believe it was Friday about noon. The village of Killarney is a small town on the shore of lake Huron and at that time there was a nearby silica mine. It was traditional to stop at a restaurant after we came out of the park at the end of a trip and have some “non-camp” food. No matter how great camp food is, after a week, anything else sounds better! After we finished lunch, Dad went out to start the car, but it would not start. At that time we would have had a used station wagon, either a Ford or maybe a Buick Special (at one time we had a used 1963 Buick Special Station wagon, which I believe was the first station wagon to have bucket seats in the front.) We asked around the small town if there was a garage, gas station or anyone who might be able to fix the car. We kept hearing about one guy who was pretty clever with cars that might be able to get it running. I can’t remember his name, let’s call him “Henry”. Henry worked at the silica mine and would come home on the afternoon ferry at about 5:30. So we patiently waited all afternoon.

At about 5:30 PM we met Henry coming off the ferry and explained our situation. Henry pretty much dropped whatever plans he had for the next hour or so and completed a diagnostic on our car and got us back running again. Cars were simpler in those days. My Dad was pretty good at fixing things, but not this time. Henry had not really fixed the car, but he had figured out how to bypass the trouble. He installed a wire with an alligator clip at each end. when installed, it allowed you to start the car, but it would not turn off. To turn off the car, you had to stop the car, get out of the car, raise the hood and disconnect the alligator clip. I am sure my father paid Henry well for his time and we were on our way!

I don’t remember exactly, but I am guessing we made a late night of it and drove all the way back home to East Aurora, NY, which would have been about 7 hours. I remember it being a wonderful trip with my father and sister, capped off by a little drama with the car, and probably really glad to get home and be back in my own comfortable bed.