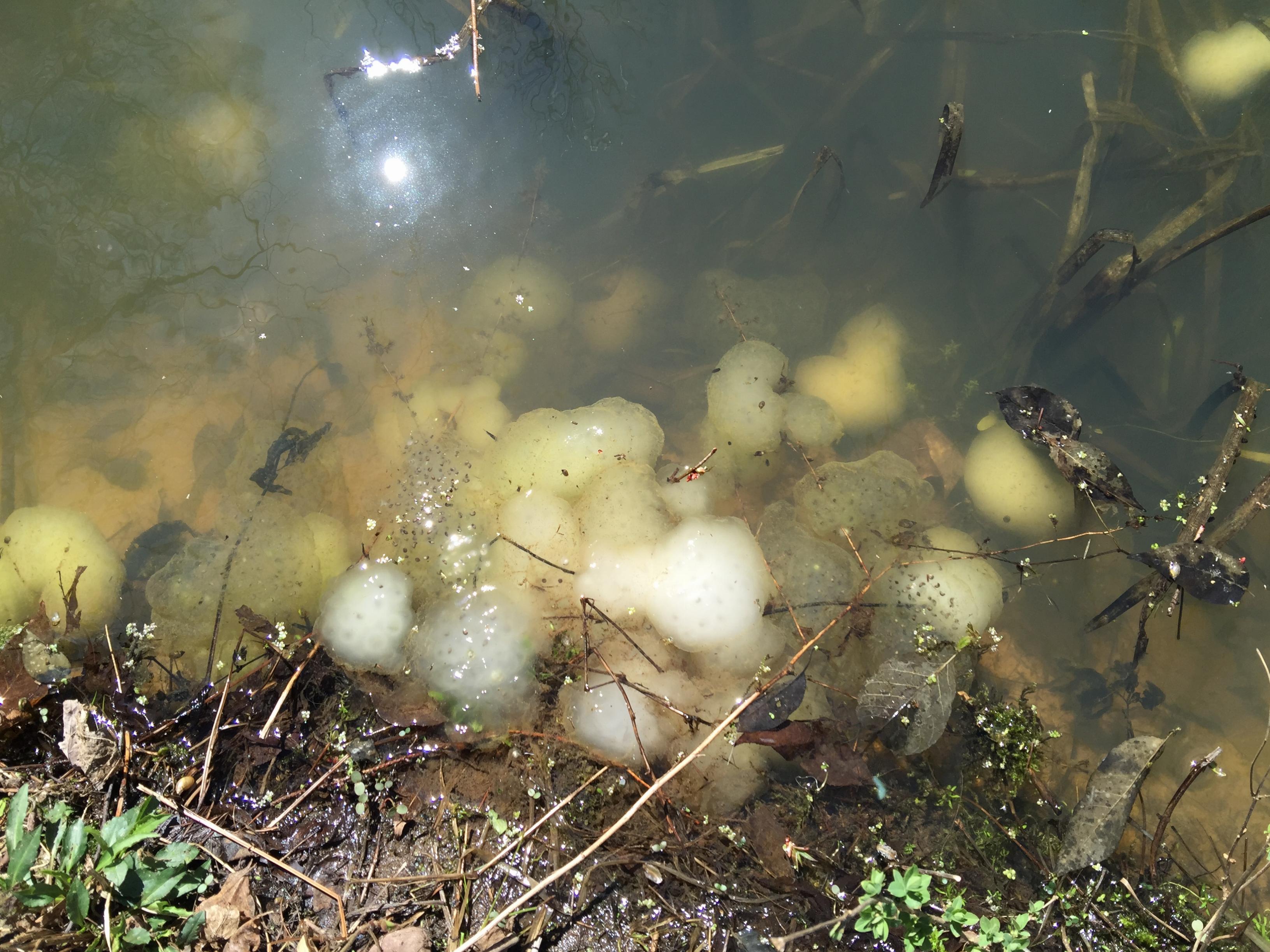 Disclaimers and Conclusions: Before you start to read this blog, we have a couple of disclaimers and conclusions to share. First we believe most of the amphibian eggs we have observed are Spotted Salamander eggs, unless otherwise noted. We researched every type of frog egg photo, for the frogs we have mentioned, and have concluded that they may not be properly labeled and therefore our descriptions may be in error. Since amphibian eggs are inherently similar, this is somewhat understandable. One would need to see the species lay the eggs to be certain that their conclusion is accurate, which is difficult to achieve. We decided to leave the descriptions of what we have observed and hope we will have a future opportunity to edit this blog and make updates with more accurate and interesting information.

Multiple egg masses laid by how many types of amphibians?

When we visited our two ponds in late April, we observed clusters of amphibian eggs, in the water. One pond is about an acre in size, has a stream running through it and is stocked with fish. The other pond is very small, spring fed, only about 30 feet in diameter and has no fish. This pond is very similar to a vernal pond, but it never goes dry. One of our first questions was what amphibians laid these eggs. We see and hear various toads, frogs, salamanders and newts from time to time, but how do you tell which eggs belong to which species? Our first action was to look up the names of the amphibians known to be in this geography of western NY state.

Toad:
American Toad – Anaxyrus americanus – Lay eggs from April through May, in two strands of black eggs. The black pollywogs hatch in 2-14 days. The eggs we have photographed are most likely not American toad eggs. We have lots of these toads on the property.

Salamanders:
Eastern Red Spotted Newt – Notophthalmus viridescent – breed in the water in which they live, they lay a few eggs each day in different places. So, these are not the egg masses we are observing. The newts and red effs are common on the property.

Spotted Salamander – Ambystoma maculatum – These salamanders migrate from land to breeding ponds in late winter and early spring. These egg clusters are similar to what we have photographed. Spotted salamanders are common on the property. 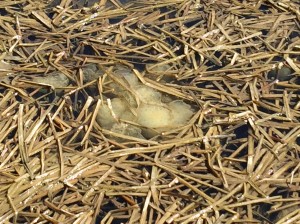 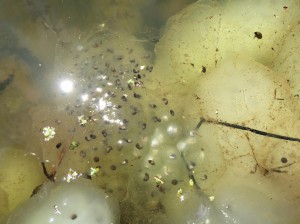 Amphibians developing within the eggs

Frogs:
Bull Frog – Lithobates catesbeiana – Bull Frogs which live in and around ponds, breed in late May – July. They lay and abundance of eggs which form a thin floating sheet on the water surface near the edge of the pond. So, the eggs we are seeing are not Bull Frog eggs. Bull frogs are common on the property.

Green Frog – Lithobates clamitans – Green Frogs also live in and around ponds. The frogs lay their eggs in mid April though June. The eggs are in clear masses with black eggs and are not similar to the eggs we photographed this April.

Northern Leopard Frog – Lithobates pippins – Northern Leopard Frogs live near water but are seen in fields and on land in the summer. They overwinter near a non-freezing water source. They breed from March – June. The egg masses are clear with black eggs which we did not observe in our photographs in April. We are not sure if we have Leopard frogs or Pickerel Frogs, or both, but we do have this type of frog, which we observe most often in fields in the summer.

Pickerel Frog – Lithobates palustris – These frogs lay their eggs in early May. The egg masses are clear with black eggs which we did not observe in our photographs in April. We are not sure if we have Leopard frogs or Pickerel Frogs, or both, but we do have this type of frog, which we observe most often in fields in the summer.

Wood Frog – Lithobates sylvaticus – These frogs lay their eggs in March and April in smaller clusters. These frogs hatch very quickly and look very similar to toad tadpoles. In our photo of the black tadpoles are most likely wood frogs. Though seldom seen, we do have Wood Frogs on the property.

Gray Tree frog – Hyla versicolor – These frogs lay eggs between April and August. The eggs are laid in floating masses of about 40 eggs, although the female will lay up to 2000 eggs. We do not see this type of egg in our photos. We do not know if we have this type of frog?

Northern spring peepers – Pseudacris crucifer – Lay their eggs March to June. They prefer to lay clusters of up to 1000 eggs which they hide on the pond bottom under debris. However if the water pool is shallow they may be laid closer to the surface where they are in clear masses with lots of black eggs. We do not believe our photos show Spring Peeper eggs. We hear these frogs but they are seldom seen.

Western chorus frog – Pseudacris triseriata – Lays up to 1500 eggs in masses of 20 to 300 eggs from March through May. We could not find a photo of Western Chorus Frog eggs to compare with the other frogs. We are guessing the egg masses are clear with black eggs, similar to the other frogs, and assume we have not photographed this type of egg cluster. We do not know if we have this type of frog?

The life cycle of amphibians is one of the wonders of life. Amphibians can be observed almost year around except for the dead of winter. It is amazing how some species brave the cold, variable weather of March and April to seek out a small body of water to reproduce.