We have been trying for several years to capture whitetail deer anger growth during the summer with the camera. It appears we are having some success this year. Antler growth is influenced by age, genetics, and the quality of the nutrition on which the deer feeds. In this field, the deer are eating Whitetail Institute Whitetail Clover, which is specially developed for white-tailed deer. We can see that the main beams, and brow tines are forming and additional points are beginning to form. It is difficult to tell at this point how many additional points will form prior to the completion of growth for this year. 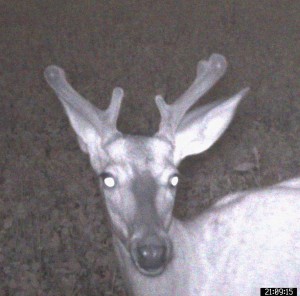 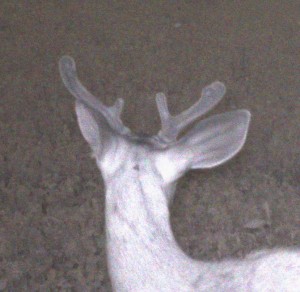 On this particular deer we can observe that this set of antlers is developing on an animal that is probably 2 years and 4 months old. The deer is of medium weight and condition and the antlers are nicely formed but somewhat thin and not very big. It appears that it will be a 7 point buck. Deer in this location have an abundance of food choices, between forest browse, abandoned farm fields, cattle pastures, dairy hay fields, and deer food plots. If we are lucky, this deer will re-visit our camera site and we can continue to watch his antlers grow. 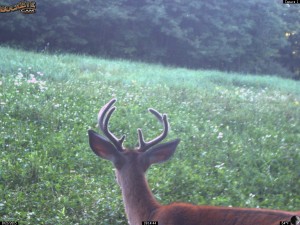